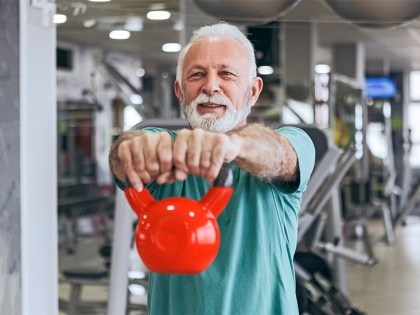 Getting older doesn’t give you a pass from working out, according to a new study.

Instead researchers found that increasing physical activity, even in your golden years, reduces the risk of heart disease and stroke.

Researchers found the level of activity needed to experience this benefit was equal to about 1 hour of running per week.

“It’s in line with studies of other treatment interventions that show its clearly never too late to improve things,” agreed Dr. Michael Miyamoto, a cardiologist with Mission Hospital in Southern California. “It’s also in line with other studies of exercise specifically showing that even those who take up exercise later in life will see clinical benefit.”

Study looked at more than 1 million people over age 60

Researchers looked at over 1 million men and women 60 years of age and older given two consecutive health checks by the Korea National Health Insurance Service from 2009 to 2010, and 2011 to 2012.

During each one, they were asked questions about their lifestyle and physical activity level. Researchers calculated the amount of moderate and vigorous exercise participants did each week and any changes between the health checks.

A little over 20 percent of inactive seniors at the first check had increased their physical activity by the second, according to the study. These people experienced an 11 percent reduced risk of cardiovascular disease.

“We weren’t surprised by our findings as we expected the cardiovascular health benefits of exercise among older adults,” lead study author Kyuwoong Kim, a PhD student at Seoul National University Graduate School department of biomedical sciences in Seoul, told Healthline.

Even those who were disabled or living with chronic conditions who switched from being inactive to being moderately or vigorously active at least three times per week significantly reduced their risk of cardiovascular problems.

“Activity is the key. Ideally, anyone at any age should routinely stimulate the heart and lungs so that the heart rate increases and the breathing rate increases,” said Dr. Thomas F. Boyden, MS, program director of preventive cardiology at SHMG Cardiovascular Medicine in Grand Rapids, Michigan. “Stimulation of the cardiovascular and respiratory systems reduce the risk of cardiovascular disease like heart attack and stroke, and reduces cancer risk and all-cause mortality.”

People with a disability had 16 percent reduced disease risk, and those living with diabetes, high blood pressure, or elevated cholesterol levels reduced their risk by up to 7 percent.

However, 54 percent of participants who said they exercised at least five times per week at their first screening had become inactive by the time of the second. These individuals increased their risk of cardiovascular problems by 27 percent.

“This is the first time I’ve seen this articulated as well as it was, that the benefits of physical activity were not sustained if a person stopped exercising,” said Becker.

powered by Rubicon Project
Limitations on the research

According to Kim, the study was limited by two factors; observed changes in exercise frequency were based on a self-reported questionnaire, and the data came from older adults from a single ethnic group (Koreans). “Therefore, in the future, findings need to be confirmed in a multi-ethnic cohort,” Kim said.

Information was missing on other types of physical activity as well, like housework, and muscle strengthening activities. Researchers were also unable to assess the reasons why some participants changed their physical activity level because this was an observational study using real world data and not an interventional one.

The findings have significant implications for an aging world.

“Globally, this finding is of public health importance because the world’s population aged 60 years and older is expected to total 2 billion by 2050, which is an increase from 900 million in 2015 according to the World Health Organization,” Kim said in a statement.

About JKREA and Its Ministries (Newer)
(Older) After Legalization, Marijuana Addiction Is on the Rise