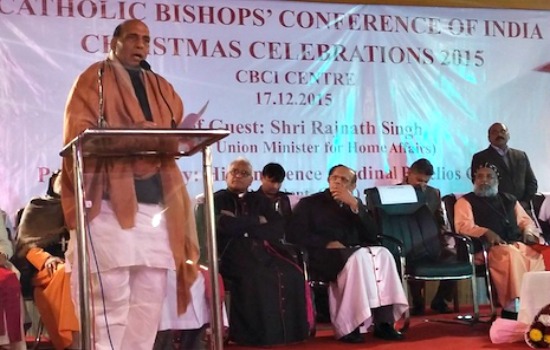 Indian government will make sure that Christians living in the country get justice and protection against religious persecution.
According to details, Rajnath Singh- Indian Federal Home Minster who is second-in-command to India’s Premier Narendra Modi has said, “We have always been with the Christian community and will always remain with them. There should be no confusion regarding this.”
Rajnath Singh was addressing the audience at a Christmas dinner which was organized by Catholic Bishops’ Conference of India (CBCI) on December 17 in New Delhi. During his address, he spoke about recent attacks on church in New Delhi. He said that these incidents seem to be a conspiracy or a coincidence.
Attacks on churches initiated with the burning of St. Sebastian Church in New Delhi on November 30, 2014. This was followed by a series of incidents of churches being vandalized and burnt for a period of two months.
Ever since the pro-Hindu Bharatiya Janata Party has rose to power in May last year; it has been speculated that BJP has been closing eyes to India’s minority communities. While on the other hand, the Indian Christian leaders hold religious hardliners responsible for these attacks.
– See more at: http://www.christiansinpakistan.com/government-will-make-sure-christians-get-justice-says-indian-federal-home-minister/#sthash.5WpialAR.dpuf