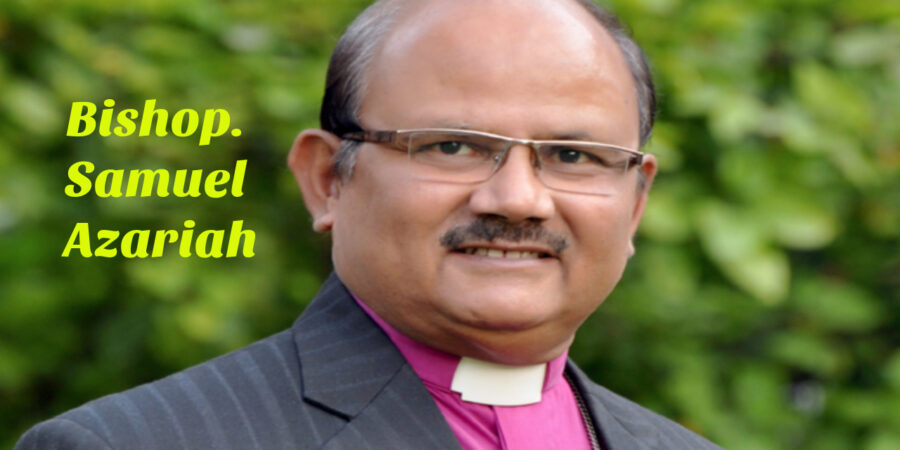 Azariah studied at St. Paul’s High School and at St. Patrick’s College, in Karachi. He completed his Honours in Sociology at the University of Karachi, in 1971.

He was ordained a deacon of the Church of Pakistan in 1979 and as a priest in 1980. He served first as curate at St. Andrew’s Church, in Karachi, to serve mainly his small English language congregation. He later became Rector, which he was until 1987. He taught during this time at the Church of Pakistan Seminary, now known as St. Thomas’ Seminary. He was elected the youngest Bishop of the Diocese of Raiwind in 1987. He first served as the Moderator of the Church of Pakistan, from 1997 to 2002, and served once again from 2009 to 2017. He also serves on the executive committee of the World Council of Churches.[1]

In 2017, he was awarded the Hubert Walter Award for Reconciliation and Interfaith Cooperation by the Archbishop of Canterbury.[2]

From Long Beach to Lompoc, Bishop Assisting Samuel Azariah baptizes and confirms Southland Episcopalians and playfully asks congregations for a show of hands if they’ve “ever seen a Pakistani bishop before.”

The soft-spoken Azariah told The Episcopal News recently he likes to ask because “I look so different. Everybody’s interested in looking at me and hearing from me.

“I tell them who I am and what my background is and where is my faith based and how it has grown, and how I have grown in my faith and experienced this ministry with passion.”

He is the retired moderator of the Church of Pakistan, the result of the 1970 union of Anglicans, Methodists, Lutherans and Scottish Presbyterians in a nation where Christians number about 2.5 million, or about 1.6 percent of the population. Of those, approximately half are Roman Catholic in the majority-Muslim country.

Elected the church’s youngest bishop in 1987, he moved from Karachi’s bustling metropolis to Raiwind, “the smallest diocese,” with about ten rural congregations and “no money, no programs, no infrastructure.”

Conversant in English, Urdu and Punjabi, he now hopes to learn Spanish. He has traveled the world, lived on several continents, served on international councils, hosted archbishops of Canterbury in his home, and last year was awarded the Hubert Walter Award for Reconciliation and Interfaith Cooperation by current Archbishop of Canterbury Justin Welby.

Most of that would not have happened, he believes, without the partnership of the Rev. Khushnud Mussarat Azariah, the first Pakistani woman ordained a priest and his wife of 40 years, and their experiences of the crippling poverty, unassailable hope and deep faith of his flock.

‘What my background is’

Azariah’s “ministry with passion” began more than 7,700 miles and a continent away, in the southern part of Pakistan. He was born in Karachi in 1949 to young parents who so desperately longed for their first child to be a son they promised God to dedicate him to the church.

“That’s how I got my name, Samuel, from the story of Samuel; ‘Here am I, send me.’” Early dreams of becoming an airline pilot dissolved into a love for the church that led him to ministry and, ultimately, to the Diocese of Los Angeles where he has served two congregations and as an assisting bishop.

“I’ve been on a journey. It wasn’t something like what happened to St. Paul, a sudden thing, but more a systematic development and growth of faith and interest in the life of the church.”

After undergraduate studies in sociology and urban development at St. Patrick’s College in Karachi, he was set to attend seminary at the Near East School of Theology in Beirut, Lebanon, when war broke out.

Instead, he went to Trinity Theological College in Singapore where he met Khushnud Mussarat, also a theology student.

Ordained in the Diocese of Los Angeles in 2009, she is the vicar of St. George’s Church in Riverside.

After his 1980 ordination to the priesthood, Azariah served as curate of St. Andrew’s, Karachi, which he humorously calls a testament to “church unity.” The mostly Methodist congregation met in a formerly Scottish Lutheran Church and was led by an Anglican. In 1987, he was elected Bishop of Raiwind and 10 years later became the Church of Pakistan’s moderator, for the first of two terms as its presiding bishop.

He has also served as bishop-in-charge of St. Clare’s, Rancho Cucamonga, where Canon Gisele Tackoor remembers his upbeat sermons, pastoral sensitivity, hopeful encouragement and steady guidance as the congregation merged with St. Mark’s Church in Upland in 2015.

“He was warm, kind, gentle, interesting, had a good sense of humor, was classy. I can’t say enough good things about him,” recalls Tackoor, who was senior warden at the time.

“He was delightful to be around and we all looked forward to seeing him when he would return from his duties in Pakistan. We didn’t know he was an archbishop until much later.”

Currently, Azariah calls St. Peter’s Church, Rialto, a “home base” and serves there as bishop-in-charge on Sundays when he isn’t visiting congregations on behalf of Bishop Diocesan John Harvey Taylor. He describes it as a lively, lovely and growing congregation with lots of possibility.

“He gives me a lot of opportunity to learn and grow,” said St. Peter’s associate priest, the Rev. Barrett Van Buren.

“It’s been a great experience working with him. He loves the church. He loves the community and he’s dedicated to making sure the people’s needs are met. And the people love him. They enjoy his charisma, his interest, his passion and his wit. He’s got a great sense of humor.”

‘Where my faith is based’

Serving among the extremely impoverished and the persecuted taught him “faith in the very simple things,” and the importance of unity, according to Azariah.

With compassion and humility, he built bridges with those trapped in the sex industry, women who initially balked even at meeting with him for fear of condemnation.

“They were mostly Christian women (and often) … circumstances had forced them into a situation of that nature. But God wouldn’t want them to starve,” Azariah said.

The nation’s constitution bars Christians and other non-Muslim minorities from holding political office, even from employment beyond menial labor. They are frequent targets of blasphemy laws and physical attacks.

He recalled invitations to dinner with parishioners, mostly in tiny, windowless mud houses “like a box. Animals were also there.”

On one such occasion, “dinner was a glass of water and one boiled egg.” On another, the meal was a piece of warm chapatti, a pita-like bread, with garlic, lemon and mustard oil to drizzle over it.

And yet, Azariah said: “I felt so good about it. It was not what I was eating or drinking. It was the love I was getting, the great faith I got which was amazing beyond my expectations. I’ve experienced the faith in very simple things.”

Once, when he was hosting Archbishop of Canterbury Robert Runcie, an elderly, bent-over woman motioned to Azariah to tell Runcie to bow to her.

The people “had never seen a white archbishop of Canterbury and he had arrived in a big car with a police escort.” When Runcie bowed, the elderly woman laid hands on his head and blessed him.

“He cried,” Azariah recalled. “He said, ‘nobody has done this ever to me. I have laid my hands on many people. But this mother has laid her hands on me.’”

‘How my faith has grown’

And the schools themselves were an inspiration, successfully training many students thought incapable of learning. That ministry taught Azariah the beauty of simple, direct, honest love.

“We learned a lot. The thing we learned from these children was honesty,” he said. “We learned to see the real divinity inside them. They are very loving.”

Similarly, he built bridges among the most unlikely of groups, creating a weeklong retreat connecting radical Muslim clerics with Christian clergy.

And yet the group found commonalities in prayer, meals and conversation. So much so that now, “whenever we as Christians have difficulty and problems in our community, some of these religious leaders would help us. It was a step forward in our understanding of the new commandment.”

He even resorted to real-life cloak-anddagger tactics to spirit a youngster out of the country to safety.

What began as a disagreement between two 10-year-olds quickly escalated into a death sentence. One was the son of a Muslim cleric. The other was a Christian. They fought, and the Christian youngster was charged, found guilty of blasphemy and sentenced to death.

“I was so emotional when it happened,” Azariah recalled. “I talked to him and said, we will see what we can do to help you.

And he said to me, ‘Bishop Sammy, why are you worried? If we have to die for Jesus Christ, we will die.’”

After an appeal, a higher court acquitted the youth. Azariah, fearful the boy could still be targeted and possibly even killed, arranged to fly him out of the country. But the pilot refused to fly them, and Azariah found someone to drive him instead.

“He was released in the middle of the night,” he recalled. “The driver drove like a madman. We changed cars, bribed police, drove 300 miles the same night. As we passed the village where the young boy’s mother lived, he wanted to stop and say goodbye to her. But we weren’t able to. We took him and his uncle to Islamabad and got them out of the country the next day.”

Sometimes, on pastoral visits to congregation, he is asked about the contextual differences between the Pakistan and U.S. churches, regarding sexual orientation, and issues including women’s empowerment.

Regarding sexual orientation, he believes: “Let God decide. Who are we to decide what is sin? God is not bothered with who’s sleeping with whom. I doubt that is God’s main agenda at the moment.”

In July, he and Khushnud will celebrate 40 years of marriage and ministry together. They are both supportive and proud of the accomplishments of the couple’s three daughters: Anushua, a mental health therapist; Arusa, a certified public accountant, and Abana, a medical resident specializing in brain injury and rehabilitative medicine.

He shares a video he has just received via email. Secretly taped, it shows an attack on a priest during a worship service in the Church of South India. As the priest leads worship, a man assaults him. Bloodied but undeterred, the priest simply turns the other cheek, and continues to lead worship.

Learning not to fear persecution has also been a lesson of his decades of ministry, Azariah said. “We were not scared of it anymore,” he said. “It also helped us understand the importance of loving our neighbor in spite of pain and hatred. We learned we have to win them over with love.”

Grateful for the welcome and support he and his family have received in the Southland, he hopes Episcopalians here know of the faithfulness of their Pakistani counterparts — that “in our poverty, in our marginalization, in our hunger, we have done the best and contributed the most for our national development, the development of the wider community.”

Mostly, he wants the Docese of Los Angeles and others to know that Christians elsewhere in the world “are a long-suffering community. We have to recognize it. We cannot sugarcoat it.”

Supporting Pakistani Muslims who are in the minority here is a two-way street, he believes.

“We must tell them, we fight for you, we stand for you, and we want you to tell your loved ones back, that they should fight for non-Muslims there. We cannot continue the sin of silence.”

Still, he joyfully leads worship, visits congregations on behalf of Bishop Taylor, and is preparing for an upcoming visit by Bishop Suffragan Diane Jardine Bruce. He hopes to learn what Southland Episcopalians have to teach him, adding: “My life, my passion, commitment, joy, hope and my challenge is the church.” 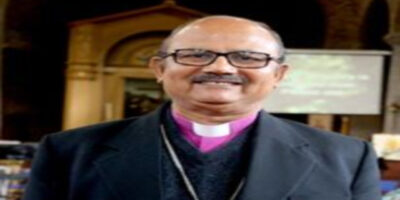 All Saints Day Confirmation and Rememberance 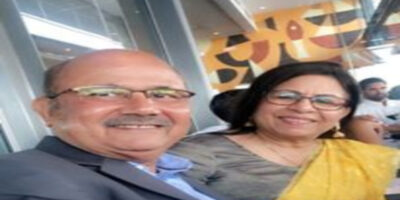